Imagining otherwise: Because so much is not being said in how one carries themselves in the world 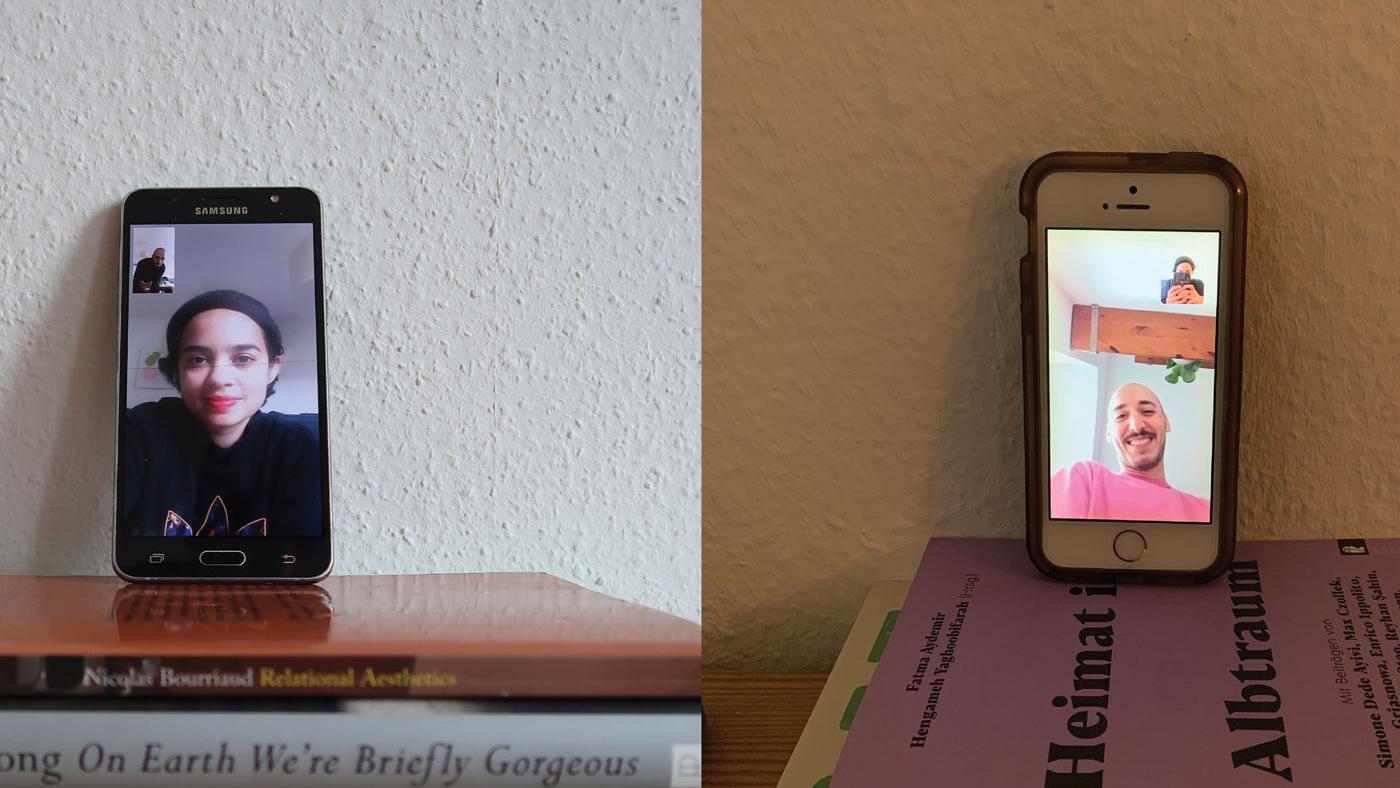 Imagining otherwise: Because so much is not being said in how one carries themselves in the world

Eva: Hello Esther and Nitsan, how would you like to introduce yourself?

Esther: My name is Esther Siddiquie, I am an artist working through dance. I am currently back in Bochum, my hometown, but I also work in the US. I make movement and performance based work. Within that I am currently dealing with my family archive but also thinking through the ideas of borders, migration and diaspora.

Nitsan: My name is Nitsan Margaliot. I am an Israeli Berlin-based choreographer and dancer. I have been based in Berlin in the past six years, working mainly between France and Germany. Recently I graduated from an MFA program at the University of the Arts in Philadelphia, US. I currently work on a series of nine solos as well as the archives of two artists who passed away during the HIV/Aids pandemic. My work is dealing with queer archives, language and relationality.

Eva: How did the two of you get to know each other and what does that say about your way of working together?

Esther: It was a kind of magical operation. I lived in Berlin for 4 years, and once I ran into a common friend, shared some of my ideas and she said: You need to get to know Nitsan. That's how we met. Shortly after that I moved to New York and we kept in touch.

Nitsan: While Esther was living in New York she came back to work at Tanzhaus NRW where we kept collaborating. Also her living in the US made me see that it's possible to do that and I got interested in the studies in Philadelphia. So we were often living in cities that are in proximity and are in an ongoing dialogue.

Eva: Esther, you have grown up here in Bochum, then moved to Berlin, London and later to the US where you are still working at the University – digitally, while being back in the ruhr region. What does it mean to you to locate a research on belonging and diasporic memory here, in Bochum in particular?

Esther: It's a research that has been going on for thirty years now. It's a condition. Both my parents came here as refugees and the question of belonging was always present for me. Thanks to the discourses around criticality and critical race theory that I was able to listen to and be part of in the US, I found a language to verbalize my thoughts and feelings for the first time. Also in relation to this city. And I understood that I need accomplices to do this work. It is a condition that we share across our different lived experiences and it was through moving away that I was able to understand and see my position in the city more clearly.

Eva: Nitsan,why is the idea to come to Bochum or this region interesting to you?

Nitsan: I find it important to bring the conversations that Esther and I are having to this area, even just because Esther is from there. That's already a large part. I was imagining how it would be if this kind of conversation would come to my hometown. But concerning my personal connection to NRW: As part of my family used to live in Cologne before the Holocaust there is a sense of returning there, or returning otherwise. It is interesting to me to come to Bochum and especially to atelier automatique, as the street where it is (Rottstraße) has a Jewish history, like the rest of Bochum, too.

Eva: Writing about your work you are mentioning that you are "positioning yourselves in relation to your inherited archives". What does that mean and how is this part of the research you are going to do at atelier automatique?

Esther: We are thinking of the term inherited archive very broadly and we are aware of the fact that the term „archive“ is also a dirty term. But there are several layers. My family history involves a physical archive that I inherited from my father who was a filmmaker in this region and the archive is located in Bochum.

Nitsan: The way I am looking at my archive is physical as well. I am looking at Stolpersteine in different cities where I am situated. So there is a relationship to the land and the traces in the cities.

Esther: Adding onto that we are also considering archive in relation to Julietta Singhs book no archive will restore you. It starts with a beautiful quote by Antonio Gramsci which says: „The starting-point of critical elaboration is the consciousness of what one really is, and is “knowing thyself ” as a product of the historical processes to date, which has deposited in you an infinity of traces, without leaving an inventory.... Therefore it is imperative at the outset to compile such an inventory.“ Singhs book is composed out of significant memories of her life and likewise I think of what we are doing as a process of compiling an inventory.

Nitsan: Further, in relation to dance, we consider the different dance trainings and un-trainings we have passed through as a kind of inheritance. In my path this has meant trying to work with very different choreographers in the refusal of a genre.

Eva: Now in the coming days at atelier automatique, what is the formal setting you are imagining or preparing?

Esther: We are setting up a mini-residency that has a durational aspect to it. We want to create a livingroom feeling. We are interested in the practice of hosting and think of the livingroom as a space that allows us to gather with our accomplices over a period of 12 hours in which our research can unfold. It's a space where we can practice reading, writing, performing, discussing, but also allowing moments of rest.

Nitsan: We are not thinking of its dramaturgy or it being something entertaining, but more of a place to brainstorm and dream together. It felt necessary at this time to come up with an intimate setting. We will host four guests Emel Aydoğdu, Fatima de Bossa, Zwoisy Mears-Clarke and Aly Ostovar individually, one after the other. Some will join us in person, others via Zoom, also leaving space for the unknown to emerge, to discover, to question, to play live music, to follow the path of some of our guests. And the conversations will be streamed online.

Eva: Besides the conversations, due to your background in dance and choreography, you are also interested in researching gestures in the absence of words.

Esther: What interests me, or how I think through dance is that gathering and sitting across from each other is already a kind of dance. How one enters a room, the gestures it takes to make a tea and serve it. I think it's about expanding the idea of what is considered dance, which is not at all a new idea. It is about acknowledging that our bodies are always already in motion.

Nitsan: So clearly we are not thinking just movement or just words, but the ways in which they contribute to one another as two kinds of knowledges that are transmitting our experiences of living. Because so much is not being said in how one carries themselves in the world.

Eva: How do you feel settings like the online talk we are in now, have shaped our ways of getting into a conversation and likewise your interest during the residency?
Esther: Part of this meeting and communicating through digital media was already part of how we were gathering. Talking across distances is not new to us which might have also helped us to get through this time.

Nitsan: As dance artists we are particularly concerned with being in movement, not just in the studio but in the world. This being prevented allows us to notice how we are in movement all the time, within ourselves and within our homes. So being at home all the time puts an emphasis on how home is registered in one's body.

Eva: You are also planning to read during the residency. Which texts are currently giving you strength and orientation in what you do?

Esther: We have a list of texts, a shared bibliography, that is always growing and expanding. To highlight a few: Both of us have been reading Julietta Singh and it really helped me understand the idea of an archive differently and how much there is to be told from one's own lived experiences. I am also close reading Tina Campts Listening to Images which helps me understand my family archive that is physical photographs of my family. Also Nora Chipaumire’s work has helped me understand my heritage. That part of my heritage is influenced by British colonial rule and how this has shaped me and the way I live in this world.

Nitsan: As we are in such an ongoing conversation I also started thinking about British coloniality in Israel during the Mandate. Further, I am thinking with Rebecca Schneiders text Solo Solo Solo or her writing about multiplicity and call and response. And as you are asking about orientation I think for both of us Sarah Ahmed is crucial in that discourse and the way we are in the world – which is always oriented.

Esther: And then the question is how to move from theory into action. That's what we are trying to do in our mini-residency.

Eva: How you are working actually seems like a good example for how theory is always already practice and the distinction never clear. Maybe it's more about moving away from the book.

Esther: Absolutely. This is the interesting thing about theory. It tries to describe something that is already happening in the world, not outside of it. As we are speaking of different forms of knowledge: This idea of knowledge that is submitted orally is one of the reasons why we are so interested in having conversations. It's a way of sharing knowledge that wasn't written, that can't be read, but comes out of a conversation that comes out of the relationships that we are composing.

Eva: Your name Always Otherwise has this notion of openness to it, like always already offering other options. Where do you hope the collective practice under this name will lead you to?

Esther: We are thinking about otherwise ways of being in the world. What else could there be? We are very much interested in continuing these conversations and expanding the network.

Nitsan: It's an invitation. A refusal of what's already there and an open question of what could be, as a way to open and let imagination emerge with it. It's a series of beginnings that is going to continue.

Eva: The residency now is situated at a site, a region, but also a local scene. Do you see Always Otherwise as connected to the ruhr region also in a longer perspective?

Esther: We are in a moment in which it is difficult to look into the future. I would say yes, because this is the area I will always return to because of the many relationships I have with the city. A lot of the work I am doing now, I can only do here. As my father's archive is in this city there is no other place where I can do it. But we will continue to be entangled with other places. 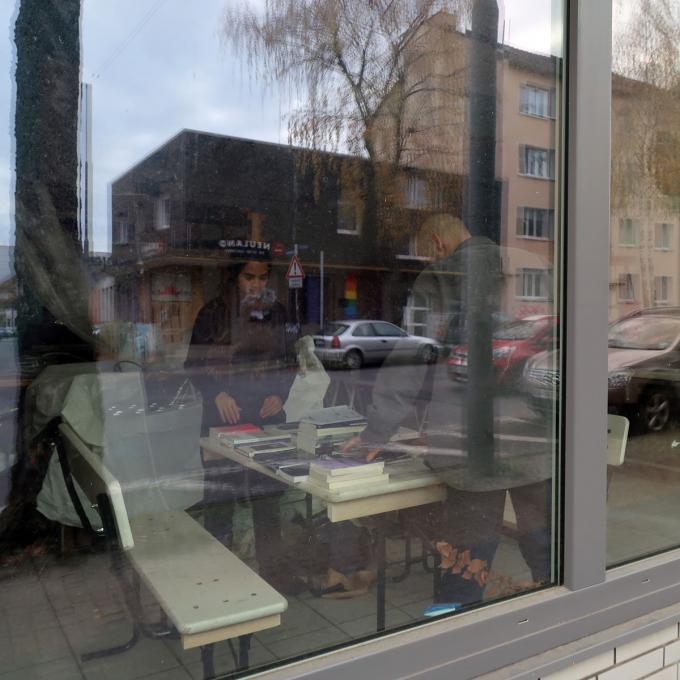 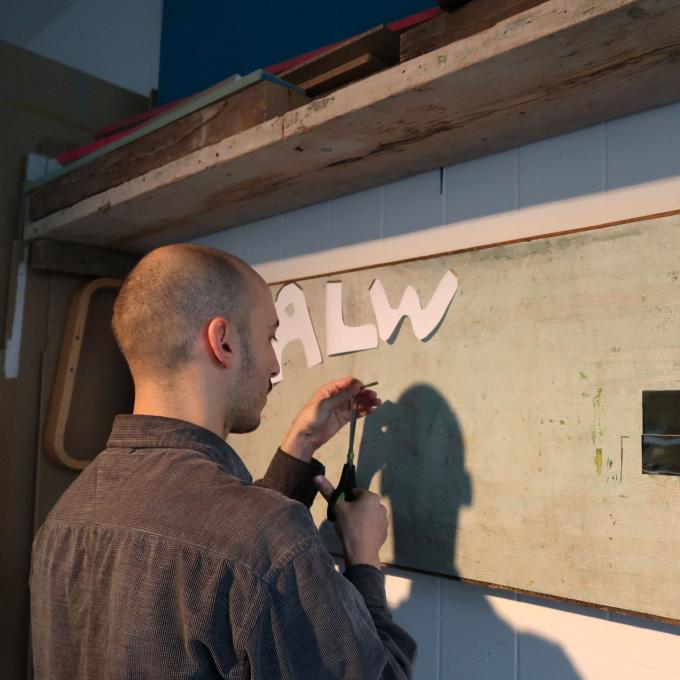 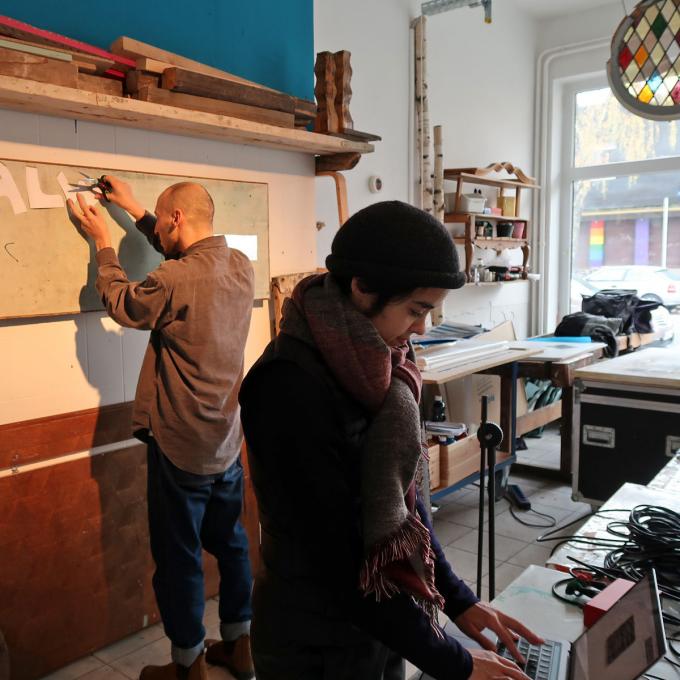 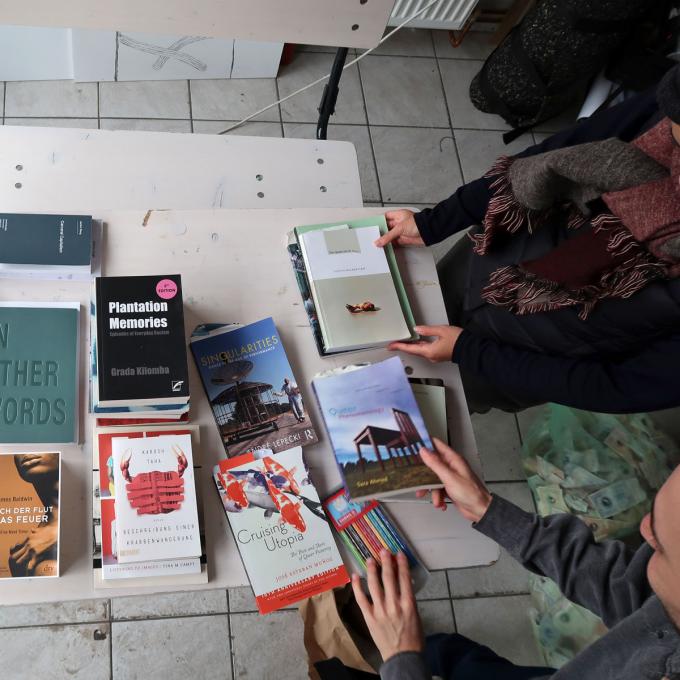 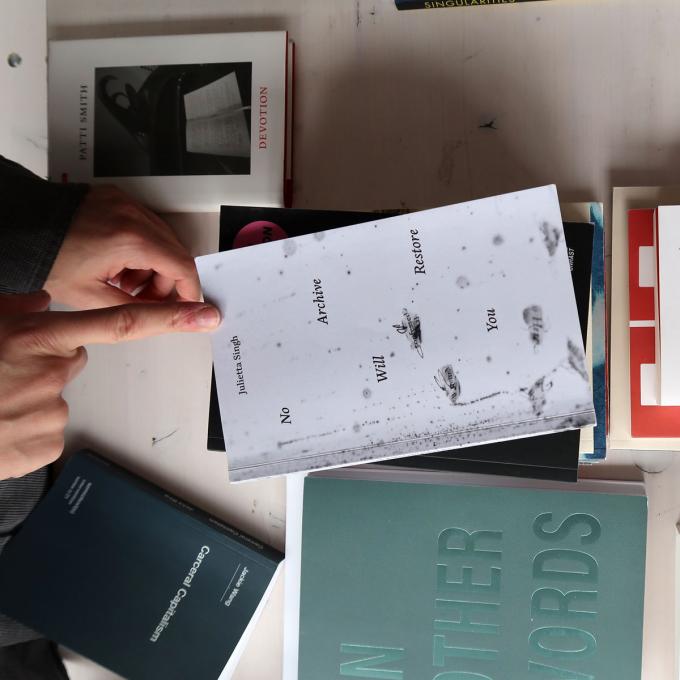 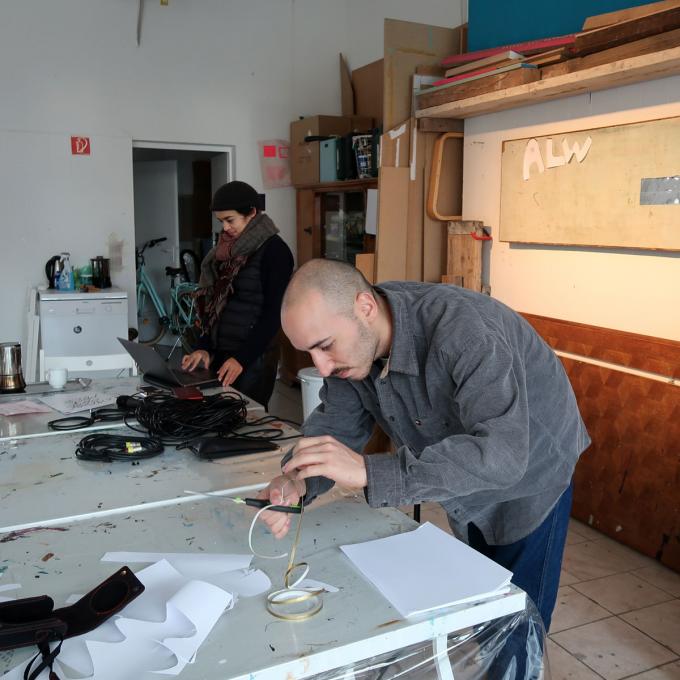